August did not start on a good foot – my husband broke his foot in July, and hobbled miserably on one leg and crutches for over six weeks.

Not allowed to put the slightest weight on his foot (it was a tricky fracture that doesn’t heal well) he spent a lot of time in bed, until we bought a comfortable chair. And he felt more and more bored, until we brought his guitars and recording equipment down from the third floor.

This was one of the moments where we realized that we are not invulnerable – and our old house with its many stairs and narrow bathrooms is everything but accommodating disabilities.

Not much time for baking, other then my usual breads for A&B Naturals. I felt like in the olden days when I was a single working mom with kids, responsible for everything and all….

But broken bones heal, and last week my husband was allowed to walk (“released from prison!”). Cast and crutches vanished into the basement, and I was finally discharged as nurse.

Just in time for the ABC September challenge – Abby Dodge‘s Mile-High Vanilla Sponge Cake. You can find this recipe in “The Weekend Baker“, or here.

This is one of the pastries that, without the Avid Baker Challenge, I would never have made on my own. Simple vanilla cakes don’t have much allure for me, and I consider sponge cakes only as base for elaborate fruit or cream fillings, as in tortes.

But challenge is challenge, so I first cooked a nice, tart plum compote, with red wine and cinnamon, to add some pizzazz to this mild-mannered cake, and cracked my seven eggs for the batter.

I opted for the citrus-y version, with orange juice and zest, and cut the sugar amount by a third: 1 1/2 cups seem way too much!

Instead of adding all the flour to the egg mixture at once, I did it in increments, folding in each addition very gently, before adding the next. This is much easier, and, also, reduces the risk of overmixing. 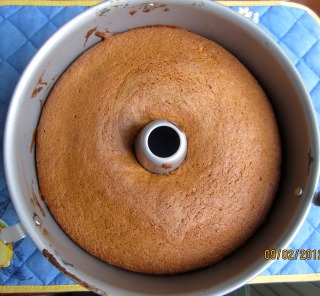 The cake rose nicely (perhaps a little less than a mile…) It was done after 50 minutes.

It had to cool upside down, standing on the pan’s little legs, for three hours, before it could be freed from the mold (like my husband from his cast.)

With the help of a long, thin knife (the one my husband calls his “monkey deboning knife” – to shock young visitors,) it came out of the pan without mishap, shedding only a few crumbs. 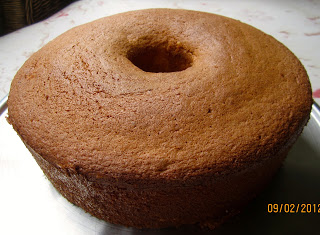 At tea time, when the vanilla cake was cut, it showed a luxurious golden crumb (eggs galore!), was not too dry and springy, as a sponge cake should be.
Together with a generous amount of Gifford’s Old Fashioned Vanilla Ice Cream and my aromatic prune plum compote it blended into a very pleasant flavor combination of tart and sweet, vanilla, cinnamon, and a hint of citrus.
Next time I would add even more than 2 teaspoons of orange zest, the cake can take a bit stronger citrus flavor.
And if you are an avid baker and want to become an Avid Baker – it’s never too late to join the fun! Contact Hanaâ (Hanaâ’s Kitchen)