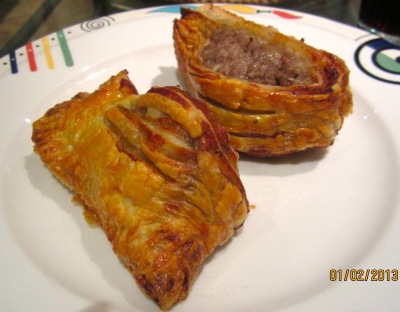 Dan Lepard, master baker from England (“The Art of Handmade Bread“), travels (and bakes) all over the world. He also contributes regularly to the weekend issue of the “Guardian”, and is always good for an interesting recipe.

I tried several of them, and never had a bad experience. Whether marmalade, pancakes, pasties, cakes or his “boozy” Ale House Rolls, we liked them all. When I saw his recipe for Stilton Crust Sausage Rolls, I was intrigued by the idea to spruce up simple store-bought puff pastry with layers of blue cheese.

There was still some puff pastry in the freezer, and I overcame my inner Scrooge to purchase real, imported Stilton.

Preparing the crust was easy. I crumbled the Stilton evenly over one sheet of thawed puff pastry, placed the second sheet on top, pressed it down with my hands to adhere, and then rolled it out to two times its original size.

The package is then folded, re-rolled, and folded again, creating several layers of cheese within the pastry. After these turns it needs a nap in the refrigerator for at least half an hour.

While the dough was resting, I prepared the sausage filling. An opened package with Johnsonville’s “Stadium Brats” – the only American bratwurst that tastes like a German one – was my sausage choice, and, instead of the ground pork the recipe suggests, I took 80% lean ground beef (another leftover in the fridge.)

The idea of a fennel seasoning didn’t appeal to me too much. Though I like fennel, and use it regularly in my breads, I do not care for the pervasive anise-y flavor of American Italian sausages (something never heard of in Italy, as my half Italian husband assures me.)

With the German type bratwurst a marjoram seasoning instead of the fennel seemed the obvious choice (I used only 1/2 teaspoon.) “Stadium Brats” don’t have casings that need removing, and my food processor made mixing a cinch. (I recommend chilling the filling until using.)

The next step was arranging the filling on the chilled pastry. I wasn’t quite sure what size of rolls I would end up with – you have to consider that before you roll out the dough – but mathematical imagination is not my forte, and my rolls turned out a bit larger than Dan Lepard’s.
I placed the filling on the lower half of the pastry, leaving a free edge for the seam. The upper half is then folded over, and crimped with a fork. To create a neat edge, I used a pizza roller to cut off the excess dough.

Since I wanted to freeze some of the rolls, I did not apply egg wash over the whole loaf, but cut it first into slices. My loaf yielded 10 slices/rolls (about 1 1/2 inch wide.)

After brushing the rolls with the beaten egg, I slashed them with a sharp knife, parallel to the cut sides.

The sausage rolls baked for 25 minutes, at 400ºF/200ºC, to be golden brown and sizzling. I realized, though, that a lot of fat was rendered from the filling during the bake, leaving the bottom of the rolls soft. Next time I would elevate the rolls with a rack on top of the baking sheet.

We had the Stilton Crust Sausage Rolls for dinner, and LOVED them! The blue cheese in the crust added a pleasant spiciness, and the seasoning of the sausages, plus the marjoram, was sufficient to flavor the whole filling – no extra salt or pepper is needed.

Dan Lepard’s recipe in the “Guardian” you can find here.

TO MAKE AHEAD: The cheese pastry and the filling, or the filled loaf (without egg wash), can be kept in the refrigerator for at least a day.

The shaped rolls (without egg wash!) can be easily frozen, individually wrapped in plastic, and placed in a container with lid. They don’t need to be thawed, but before baking, brush them with beaten egg, and slash the top with a sharp knife. The baking time will be a bit longer for frozen rolls.